The word ‘flake white’ comes from the fact that when simple lead carbonate is produced using the old Dutch technique, or ‘stack process,’ it breaks off the metallic bits of lead in the form of flakes. This is not the case for modern-day lead white, which is the pigment form used by all artists’ paint manufacturers today.

The word ‘flake white’ comes from the fact that when simple lead carbonate is produced using the old Dutch technique, or ‘stack process,’ it breaks off the metallic bits of lead in the form of flakes. This is not the case for modern-day lead white, which is the pigment form used by all artists’ paint manufacturers today.

The word ‘Cremnitz white’ was mistakenly coined to describe simple lead carbonate produced in Klangenfurt, Austria, in the 18th and 19th centuries using a method that was similar but not identical to the’stack process.’

The lead used to make lead white in Klangenfurt came from galena mines near Krems (in the Austrian state of Carinthia), hence the terms Kremsweiss, Kremserweiss, Krems White, Kremser White, and the incorrect attributions Cremnitz White or Kremnitz White. The United States Consulate General in Vienna, Edmund Jussen, acknowledged this in his paper in 1887:

Kremserweiss (Kremser white) got its name because an outstanding quality of white lead was made in Krems, a small and ancient city in Lower Austria, at some point in the past. At the moment, no white lead of any kind is manufactured in Krems, and local dealers say that no white lead has been produced there for at least 150 years. For a long time, the city’s manufacturing was limited to the production of hardware, mustard, and vinegar; however, the highest quality white lead is now known as “Kremserweiss.”

The appellation “Cremnitz” weiss, or white, is unknown in the trade here, and is most likely derived from the resemblance of the two names Krems and Cremnitz (or Kremnitz). Kremnitz (or Cremnitz) is a small city in Hungary’s Bars Comitat with a population of 8,550.

Most artists’ products producers now call their white oil paint ‘Cremnitz white,’ because it is made by grinding pure lead carbonate in a vegetable drying oil (linseed, walnut, or safflower oil) without the addition of zinc oxide.

Prussian blue is a solid blue dye with a strong tinting intensity and a wide variety of colours, from the lightest tint to a deep blackish-blue. Winsor Blue is a member of the Winsor & Newton “Winsor” family of colours, which was developed to replace less stable colours like the 1700s Prussian blue. 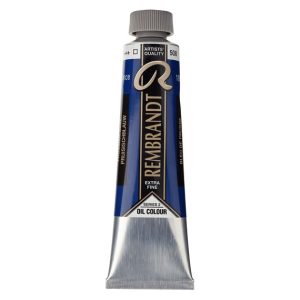 Prussian blue, one of the first modern metallic pigments, was discovered by accident in 1704 by Berlin-based colormaker Johann Jacob Diesbach, who was working on a red lake pigment to use as a dye with iron sulphate and potash.

The potash was polluted with impurities in the form of animal oil on this fortunate day. Diesbach developed a purple instead of a bright red, and when concentrated, it became a deep blue pigment. This unintentional discovery offered a new alternative to ultramarine (lapiz lazuli), the only permanent blue pigment available, which was exorbitantly costly due to its limited availability in Afghanistan.

Many artists in the Prussian court were using Prussian blue by 1710, giving it its reputation. It was painted in watercolour and oil colour in Europe by artists such as Antoine Watteau and Jean-Baptiste Pater. It then made its way around the world, including to Japan, where Hokusai used it in his woodblock painting The Great Wave off Kanagawa. Since then, artists such as Monet, Constable, Gainsborough, Lowry, and Picasso’s iconic “Blue Period” have used Prussian blue in their palettes.

Prussian blue has a propensity to disappear and become greyish over time in many of these historic paintings.

By 1710, many artists in the Prussian court began using Prussian blue, which gave it its name. Artists such as Antoine Watteau and Jean-Baptiste Pater painted it in watercolour and oil colour in Europe. It travelled around the world after that, including to Japan, where it was used in Hokusai’s woodblock painting The Great Wave off Kanagawa. Prussian blue has been used in the palettes of artists such as Monet, Constable, Gainsborough, Lowry, and Picasso’s classic “Blue Era” since then.

In all of these historic portraits, Prussian blue seems to fade and become greyish over time.

Winsor Blue shares much of the same characteristics as Prussian blue, such as extreme pigment richness, clarity, and excellent tinting abilities, but it is also fully permanent and lightfast. It blends well with other colours and creates a perfect glaze when thinned. Winsor Blue (Red Shade) is best for mixing purples, while Winsor Blue (Green Shade) is best for mixing greens. It is a deep and intense blue that approaches black in masstone and is formulated with either a red or green undertone, leading to the variations of Winsor Blue (Red Shade) and Winsor Blue (Green Shade).

In 1704, a chemist was attempting to concoct artificial crimson when he accidentally found the first metallic dye of the Industrial Revolution. Phthalo Blue is a cool blue with a more subdued hue. It has a high tinting power, is lightfast, and has a particularly lovely transparency.

The colour of flesh and the tone of the paint in the finished portrait were two prominent aspects in Lucian Freud’s portraits in later years.

Freud used Cremnitz White to create all of these qualities in his portraits and nudes paintings.

He started using the thick, granular pigment cremnitz white in the mid-1970s, which he has since reserved for the painting of skin. 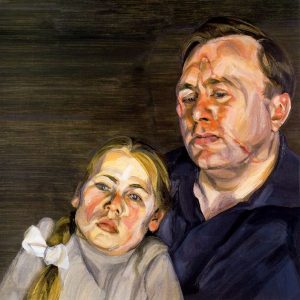 The human skin in Lucian Freud’s paintings has almost limitless nuances, ranging from exquisite opalescent pink to blood red, as well as the entire spectrum of cream, oncre, and bistre colours. The painter’s eye discriminatory force allows him to go farther than we might. This heightens the nakedness of the skins, while the paint’s roughness, overloading, and impasto imbue the skin with a physical reality: skin as delicate and vulnerable as an exposed mucous membrane.Lucian Freud: The Studio

What is Cremnitz White?

Cremnitz White is made of lead carbonate (PbCO3) and refers to a certain form of Lead White that was common among the old masters. Lead white is a yellowish white with a warm undertone.

It was named Cremnitz White because it was first made in a town called Cremnitz (by the Hapsburgs), which was formerly known as Kormeriz.

Cremnitz White is a specific form of pure Lead White that has a stringy quality.

It is made up of lead carbonate (white lead) and does not contain the zinc oxide (as does Flake White) that makes it dry easily.

Its actual efficiency and drying time are dependent on the oil it is combined with, as discussed below in relation to Michael Harding’s three Cremnitz White variants.

To get a lot more detail, click the related links.

Blue is not only a dominant colour, but also the colour of the clear sky, certain bodies of water, and the Virgin Mary’s garments by tradition. Since blues come in a variety of chromatic intensities in nature, having a reliable lightfast deep blue is one of the first criteria for any palette.

Blues are perhaps one of the most interesting pigments in terms of their history and use. The history of ultramarine blue, one of the oldest pigments still used in art, could fill a book. Over the same time period, artists used Smalt, a powdered blue-colored glass with cobalt oxide as the active pigment. In 1803-04, Thénard found cobalt aluminate and saw its promise as a pigment. Cobalt Blue was soon incorporated into artists’ paints because it predated the invention of artificial Ultramarine. It was available in oil paints and watercolours from about 1806 to 1808.

So far, the oldest known use of Cobalt Blue is in the sky of JMW Turner’s oil sketch of Goring Mill and Church, which was painted about 1806-07. This demonstrates how Turner began his oil and watercolour paintings in the same way. Turner could return to the sketch later and incorporate foreground detail before finishing it if he got it to this stage.

Jacques-Antoine Vallin’s portrait of Dr Forlenze (1807) is another early example of the pigment’s use in France and Germany. The subject was educated in Naples, and the painting was created in Italy, with the volcano Vesuvius in the background.

Another early adopter was Caspar David Friedrich, who used Cobalt Blue in the sky of his magnificent Riesengebirgs Landscape of Increasing Fog in 1819-20.

Delacroix used cobalt blue in his famed Liberty Leading the People (1830), but he may have used other blues as well, perhaps Prussian Blue, which was common in the early 1700s.

The same is likely true of Corot’s panoramic vision of Avignon from the West (1836), in which the sky seems to be coated with Cobalt Blue, but the blue colour admixed for distant land and forests appears to be black.

Turner’s famed painting of the Fighting Temeraire, from 1839, is perhaps the first major painting in which Cobalt Blue was used widely, as the artist seems to have used it in both the sky and the sea.

Cobalt Blue‘s launch has not been without debate. Early nineteenth-century artists became increasingly concerned about the permanence of the pigments they used, and they looked to experts including chemist George Field for assurance that their paints would not fade. Field claimed in his seminal 1835 book Chromatography that Cobalt Blue appeared to turn green over time, which is unusual considering its known chemical stability and may be due to improvements in the oil binder rather than the pigment itself.

Ultramarine Blue dye was formerly produced from lapis lazuli, a luminous blue stone mined in Afghanistan. The name comes from the Latin words ultra (beyond) and mare (sea), alluding to its far-flung roots.

Lapis lazuli was very costly in Renaissance Europe due to its scarcity and the time-consuming method of grinding the mineral into colour. The yield was low, with just 30g of pigment produced from 1kg of mineral. As a result, it was only used sparingly, with the Virgin Mary’s and other holy figures’ garments being the exception. The colour came to represent modesty and simplicity, as well as the patron’s power, who commissioned its use. On the invoice, an artist would always charge for the pigment individually so that the patron could pick how much ultramarine they wished to pay for.

Dutch artist Johannes Vermeer used the pigment heavily in nearly all of his works in the 17th century. The Girl With a Pearl Earring turban is coated with Ultramarine and Lead White, then glazed with pure Ultramarine. 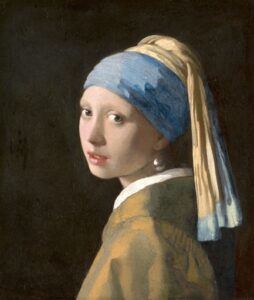 The Development of Synthetic Ultramarine

In 1826, French chemist Jean-Baptiste Guimet produced a synthetic form of Ultramarine by heating kaolinite, sodium carbonate, and sulphur in a kiln to produce a pigment that is chemically similar to lapis lazuli but much more vibrant in colour. It was given the name French Ultramarine to distinguish it from its mineral equivalent.

French Ultramarine soon became more popular than the original mineral pigment due to its affordability and usefulness as a lapis lazuli substitute, and it is now considered an important colour in an artist’s palette. Genuine lapis lazuli paints are still produced, but they no longer bear the Ultramarine name. Lapis lazuli is a more muted colour than synthetic pigments, and it has less coverage and tinting ability.

Synthetic Ultramarine Blue is typically a dark, reddish-blue, although it comes in a variety of shades, and some specialist brands offer several Ultramarines. To reflect the colour bias, they are often labelled as either “green-shade” or “red-shade.”

Menu
This website uses cookies to improve your experience. If you continue to use this site, you agree with it.
Ok